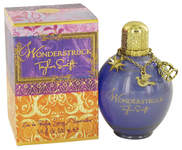 Wonderstruck perfume for women at a discount price. FREE Shipping and Insurance with every order! No Hidden Charges. No Minimum Orders. The celebrated pop singer Taylor Swift, in co-operation with the distinguished Elizabeth Arden, launched her fragrance Wonderstruck in 2011. The nose of the perfume is olivier gillotin of givaudan. The inspiration has been drawn from her song "Enchanted" - the same effect that this fragrance creates at first meetings. The opening notes of the eau de parfum are floral and fresh with freesia, tea, black berry, and raspberry and apple blossom. The heart is a gourmand vanilla, honeysuckle, and hibiscus. The background is woody with sandalwood, musk, amber, and citrus peach. It comes in a stylish flacon with a golden cap and laced with a golden chain, flaunting suspensions.
We only sell 100% authentic, brand name fragrances. We do not sell knock offs, imitations or designer imposters.
SAVE NOW on Wonderstruck Perfume by Taylor Swift!
GET $5 BACK on any order of 2 or more fragrances when your order ships (excludes Avon products). Limited time offer.
Taylor Swift

View other perfumes, colognes, fragrances or products by Taylor Swift.
No hidden charges, no minimum orders!

Wonderstruck Perfume is comprised of many different scents. These scents are called fragrance notes.
Top notes are very light and last but a few minutes (5-10 minutes).
Middle notes become apparent in about 15 minutes after application. They can last up to an hour or more.
Bottom or base notes last the longest, usually for several hours.

Some Wonderstruck Perfumes last much longer than others

People with dry skin usually find their Wonderstruck Perfume holding time shorter than those with oily skin because oily skin has more natural moisture to hold in the fragrance. PH levels (amount of acidity in our skin) also vary slightly from person to person. Our individual levels of PH will determine how each ingredient in Wonderstruck will react.

A perfume will last longer on some people than on others because of differences in skin (oily or dry) and PH levels. To achieve a longer effect, try layering your Wonderstruck. Using the Wonderstruck bath gel, moisturizer, or powder before applying the actual fragrance will usually have a longer lasting effect. Apply the perfume low on your body allowing the scent to rise. Also, apply it behind your ears and neck. A light spray on your hair can last all day.


Differences between a Wonderstruck Perfume Splash and a Spray

There is absolutely no difference in the perfume. The difference is only in the application. A Spray bottle, being ostensibly sealed all the time, may actually have a longer shelf life. Making the decision between Wonderstruck Spray and Splash is entirely a matter of personal preference.

Wonderstruck Perfume Testers are created to help promote the fragrance. Although the majority of our products are NOT Testers, the Testers we do carry are clearly marked as such in the Available Selections column of every product page. Testers are provided to large retail stores to allow their customers to “test” the actual Wonderstruck Perfume before buying it. It is the same Wonderstruck Perfume that one finds in full size Wonderstruck bottles. Testers may come in a variety sizes and forms of packaging. Some are offered in simple generic plain white or brown boxes with or without a cap. Some bottles may have “Tester” or “Demonstration” written on the bottle. Some are even without boxes, while others may come ornately wrapped. Regardless of packaging, the quality of the perfume is not affected. The contents of testers are the same as in the standard full priced packaged item. One can enjoy their favorite Wonderstruck Perfume at the lowest prices. We sell only new and unused testers free from damage and defect.

Alcohol makes the Wonderstruck Perfume emanate from your skin. Without alcohol, you would be the only person who knew you were wearing any perfume at all.

Keep Wonderstruck Perfume in a cool, dry area away from windows, as sunlight and heat can unbalance Wonderstruck ingredients. Any opened Wonderstruck bottle should be kept in its box to ensure a longer life.